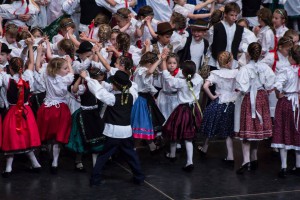 The Csillagszemű (Starry-Eyed) Dance Ensemble is one of the most prestigious folk dance groups in Hungary. They regularly perform at the Hungarian Dance-Performers Gala in the Opera House and they take part at excellent dance festivals and events. The Ensemble was awarded in 1998 with the Hungarian Heritage Prize and in 2003 with the European Dance Prize.

The Csillagszemű represents Hungary all over the world, in Europe, New-Zealand, Japan and India just to name a few.

Sándor Timár, choreographer, owner of several awards including the Artist of the Nation Award, and his wife Böske Timár established the dance ensemble in 1993, which is unique in Hungary and Europe. The ensemble counts some 750 children among its members, with the youngest being 3 years old. The Csillagszemű Dance Ensemble teaches dance through workshops in which children learn their native folk dances. 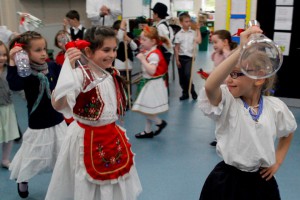 The Timár method in teaching folk dance is similar to the Kodály method in musical education. The children learn their dances in the same way they have learnt their mother-tongue, by copying the adults and older children. The essence of this method is to introduce the existing folk dance and folk music traditions of Hungary to as many children as possible, at the earliest possible age. This is done not only through lessons and stage performances but as a real life experience because of its wonderful educational and community developing effect.

In 1996, Yehudi Menuhin, the famous violinist and conductor, said to Böske Timár when he handed an award to her: “You are doing a wonderful work with the children! All over the world the children need to learn to sing and dance the way I saw here this evening.” 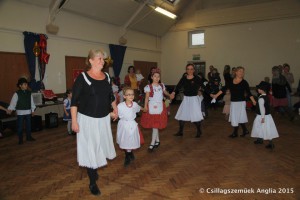 In 2014, with the support of the Csillagszemű Dance Ensemble the Csillagszeműek Anglia (Starry-Eyed Hungarian Folk Dance Group) was established to provide folk dance classes in various Hungarian communities in South-East England using the very effective Timár-method. 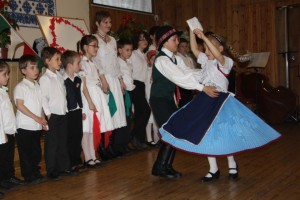 In addition, Csillagszeműek Anglia also organises special events such as all-day folk dance workshops for children during half term holidays, children dance houses with guest teachers and performers of the  Csillagszemű Dance Ensemble visiting from Hungary, and provides opportunities for children to perform their dances on stage at various events. 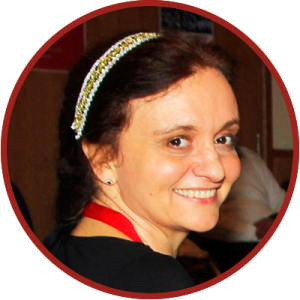 Krisztina Paladi-Kovacs was introduced to folk dance as a young school girl, then she danced with various folk dance ensembles during her secondary school years and university studies in Hungary. She received training in folk dance teaching and was also admitted to the junior dance group of the Hungarian State Folk Ensemble led by Sándor Tímár. Instead of following a dancing career, she has eventually decided to study law but kept on regularly attending folk dance clubs and folk music events.

Having lived abroad, Krisztina has experienced the importance of knowing one’s own culture, nurturing its traditions and respecting and keeping one’s roots and heritage alive. In the UK she started to teach Hungarian folk dance in 2010. Krisztina continuously develops her knowledge and skills in both folk dancing and ethnography in order to provide the children with a great experience at her sessions.

Krisztina receives enormous support from Dr. Attila Paládi-Kovács, ethnographer, professor, member of the Hungarian Academy of Science as well as Böske Timár, who is also the mentor and artistic leader of Csillagszeműek Anglia.